Today, because you’re here, I’m going to guess that you’re probably looking to improve your health, and just maybe you’re where I was just a few years ago …

“I have fifteen – maybe only ten — seconds to live.”

The house shattered around me as a shockwave threw me to the floor while somehow the mattress found a way to cover me.

Instantly an SUV pinned me to the floor, forcing the air out of my lungs.

Against the back of my head, just on the other side of the mattress, one busted tire spun-flopped slowly to a stop.   The *ding* *ding* *ding* of an unbuckled seat belt was the loudest sound as the engine slowly died, yielding to bright headlamps and a commercial playing on its radio.

I realized that the SUV might be leaking gas. 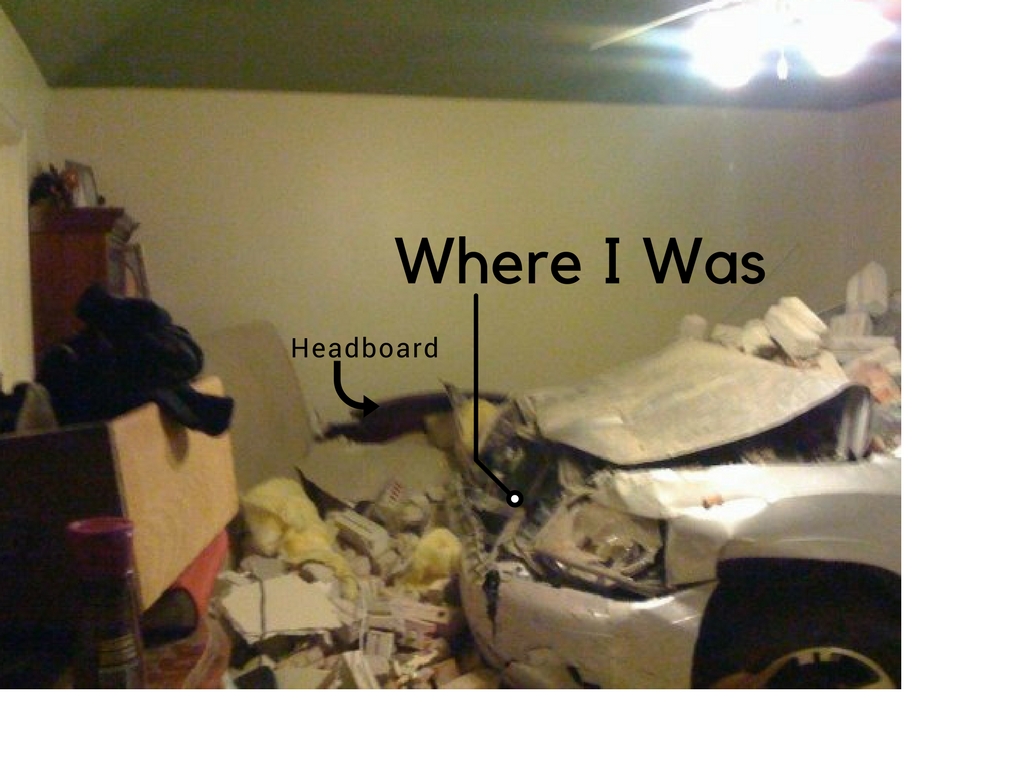 In short, I was in shock and realized my life would never be the same again.

Though in my mid-30s, I looked older then than now, and was fast-walking to a heart-attack and early death.

What was worse is that my mind quit working – my memory was shot.

Basic math required a pen and pencil (for reference, I have an engineering degree), and writing even a good sentence became a struggle.

The sleeping pills and blood-pressure medications I took at that time barely masked the symptoms. I was disintegrating from the inside.

Then one day a single flight of stairs exhausted me.  Was this the same “me” that ran three miles regularly just a decade ago!?

Slowly I began exercising (also slowly) and one day ‘jogged’ a 12-minute mile — and was proud of it.

After years of struggling with slow progress, one day I stumbled across a time management audio by a guy named Eben Pagan who mentioned that he starts each morning with a green juice (a recipe wasn’t mentioned), and there just happened to be a juice bar half-way between my home and office.

In quiet desperation, as much as the thought of drinking green juices made me a little nauseous, I resolved to try twice-daily juicing and see if it might help.

Little could I imagine at that moment that juicing would completely change my life!

Five weeks later, while driving to my office one morning and I was absolutely awe-struck because all the traffic lights for about two miles down the road were visible!

Shortly after, colors went from ‘flat to full’ —  nuances and textures came to life, and I could see at night! It was wonderful!

I was becoming SO motivated about juicing!

Eyesight improvement alone would have been enough to convince me to keep juicing, but even more results kept showing up . . .

And, the end of June something truly amazing happened:

On June 2, 2015, around 11:00 PM there was this crazy sensation: I was tired! I had literally forgotten how it felt to be ‘sleepy’ tired instead of ‘exhausted’ tired.

Looking back on it now, what I didn’t realize at the time was so much more profound than restoring my sleep . . . my brain was healing.

And over time my ability to write, think clearly, and do complex math were all back. Even a few memories were being restored.

Although that journey was mine, this journey is really about you.

My mission is to empower you to shortcut your journey to good health so that you don’t waste the best years of your life struggling with “marketing hype” that targets your vulnerabilities or the politically-driven food guidelines from the FDA.

I’m honored that you’ve read this far, and ask that you allow me to show you how to travel your journey to good health faster (and actually enjoy it).

Whether you’ve had ‘your’ SUV moment, or arrived at a similar place slowly — or realize that you’ve been mislead by this crazy thing called ‘the food pyramid’ — you’re why I started this blog.

There’s more good news: you already possess all the skills you need to enjoy fresh fruits and vegetable juices and begin experiencing the life of you were born to enjoy.

You can do it!

I believe juicing can play a large part in making it happen, and happen faster.  Just keep reading the posts, and follow this blog to discover how.

All the best, Steve